3 large and 2 small pies were the result of what was supposed to be 2 regular pumpkin pies. Here’s what happened. 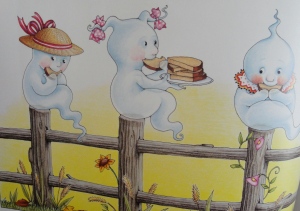 I want to take pumpkin pie to our son’s teacher tomorrow morning–it’s Halloween, and we’re headed to the school to help carve pumpkins. Besides, teaching second grade just deserves a big thank you, right? So I start out this evening on what should be an easy pie night. Well….don’t should on yourself, pie-maker. You were wrong.

I zipped by the store on the way to a Halloween dance my 13-year-old had at church. She forgot to tell me that she needed to bring a snack, and I knew I needed a couple of things for pies. When we went to the store, I had purple-ish pink hair leftover from a different Halloween activity earlier in the day. She was wearing a TARDIS costume. If you don’t know what a TARDIS is, Google it. We’ve raised a sci-fi geek, and we’re proud of it. Anyway, she was acting just like a 13-year-old girl in the grocery store in her Halloween costume–stuck somewhere between horrified and awesome. So we were hurrying, and I eagerly chose two frozen crusts for the pumpkin pies. “These are fast,” I thought to myself. No worries.

Anyway, I get home after dropping her off and get started on the pies. The first thing I could have done differently is to CLEAN UP, DANGIT. The kitchen looked like a tornado hit it, but I really wanted to get those pies in the oven, and they would be simple. The result of not cleaning up was finding spaces to do things. This took more time and creativity than I had at the moment.

Next, as I was pouring pumpkin filling into one of those easy frozen crusts, I noticed a small defect. It really didn’t matter (or so I thought). It was just a little piece of crimped crust that had chipped a bit. No biggie. I just stuck it back on and gave the dough a little “squish.” Problem solved.

Just a few minutes later, the kitchen was filled with the smell of gourds on fire, and I opened the oven to find this not-so-picturesque baking situation.

Son of a pumpkin!

Already, I had three other pies in there with this one, because I realized as I filled the two pie shells that I was going to have A LOT of extra filling, and I couldn’t bear to waste it. That’s how I got the two tiny pies. I happened to have two small pie pans left from when I made mini pot pies, so I dumped the filling in those. Cute! But now, one big pie and two little pies baked on as I struggled with the pie-saster at hand.

I quickly got a refrigerated crust out, tossed it in a pan and crimped it. I dumped off some of the filling from the mutant pie and added some from the bowl of never-ending filling. So now I’ve got five pies. I stuck the broken one back in and finished baking it. After the first four came out of the oven, I stuck in the fifth. There was no way they were ALL going in at the same time.

Whew. I’m off to tackle one of those tiny pies with a heap of Cool Whip.

Tomorrow morning, I will pick the best two pies and decorate them with cute little whipped cream ghosts–barring any other pie-bacles…

Here’s the Pumpkin Pie-looza line up.