Today I made three cheese pies. Two of them were a variation on yesterday’s cheese pie. I needed to take something to a church breakfast, so I made the cheese pie and added BACON. Bacon makes everything better. The other change I made was cooking them a bit longer. I really liked how the brown toasty cheese tasted on top. 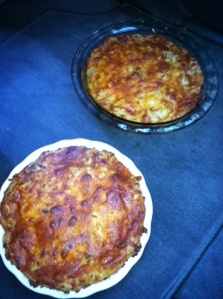 They really weren’t as dark looking as the picture makes them seem . They were a success, though, and only a small sliver of each was left when I went to get my pie plates.

Late this afternoon, I made one more pie. It was called Chocolate Cheese Pie and was from yet another church lady cookbook. 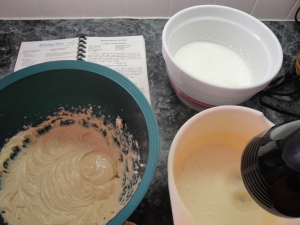 The cheese was cream cheese, and this time, I let it soften to room temperature, which worked great. What didn’t work great was the bowl with the egg whites. They just didn’t “make stiff peaks,” and I’m pretty sure I know why–I didn’t wash my beaters in between bowls. If you get anything in there with those egg whites, you can kiss your stiff peaks good-bye, sucka.

A bowl that did go well was the one with heavy whipping cream. It behaved perfectly–stiff peaks and all. All three bowls got folded together (and really there was one more container from the microwave with melted chocolate chips–modern day double boiler) to make a tasty chocolate pudding looking stuff. Then I dumped it all into a graham cracker crust.

It was supposed to be a chocolate graham cracker crust, but I didn’t have one, so….too bad. Or too good. We’ll see. Anyway, here’s the pie in the crust: 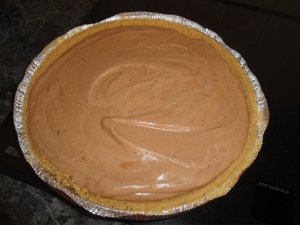 It’s supposed to sit overnight in the fridge, and that’s where it is. I’ll let you know how it tastes.

All this egg-whipping brought to mind this question:

When we spill a bit of raw egg on the counter, we disinfect frantically to avoid germs or salmonella or whatever; however, I just whipped up some raw eggs with chocolate for dessert. How does this not make me sick? I’m sure there’s a simple answer–plenty of pies and other stuff are made with raw eggs.

OK. Short and sweet tonight. Busy week ahead and the pie-maker’s gonna stare absent-mindedly into the television. Good night!

One thought on “3 Cheese Pies”