Eunice is the name of, I’m sure, a very sweet lady who submitted a recipe for Cheese Pie. Here it is–from one of those nice church-lady cookbooks I’ve mentioned before: 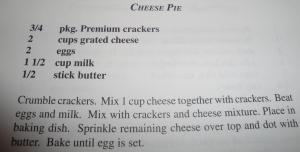 Now, at first glance, I thought, crackers, cheese, butter…how could that not be delicious?

Take a look at this recipe and see if you have any questions about it. After I read through it a second time I said out loud, “Ummmmm…..OK,” and then, “Gimme a break, Eunice!” I didn’t include her last name, because I’m sure she’s great and all, and I’ll bet her pie tastes really good because SHE knows how to make it.

But really, Eunice? “Premium” crackers? Ya mean Ritz? Keebler? Square or Round? What size package?

And “until egg is set” will surely leave me with my oven light on and my nose pressed against the glass…*rolls eyes*. 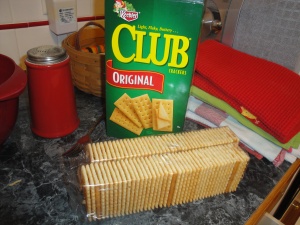 The whole reason that we made this pie (me, my daughter, and her friend, Katie) was that they had a cheese pie joke from few years ago that has lasted throughout their friendship. They’re best buds, and I’m thankful my kid has found such a great girl to hang around with!

So here’s how it went down. It was around 9:30 in the morning and just as soon as I rounded up the girls to make the pie, gathered some ingredients, and began to preheat the oven, I realized that we were out of milk. Woops. So I texted my in-laws to see if they had milk. They did, but it was fat-free organic. I told them that no one would know the difference–just put it in some other container and I’d send the girls up to get it.

10 minutes later, the girls walk back in with the milk (unmarked container) and we start working on crackers. The picture above shows the brand we used and what we guesstimated as “3/4 pkg.  Premium crackers.” Katie crushed them up in a bag. 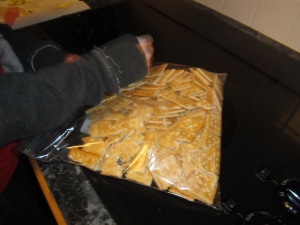 Ruthie  mixed in all the other stuff–the cheese we chose was cheddar–and dumped it all into a pie plate. 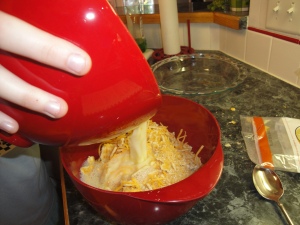 We forgot the butter entirely. It seems like it didn’t matter so much–I think it might’ve browned it a bit more, but also may have made it too mushy.

It baked at 350 degrees for about 40 minutes (that equals “until egg is set.” We just guessed, and we waited for the edges to be brown a bit. That was a good call, and next time, I’d probably let it cook even a bit longer, because the brown part was the tastiest, in my opinion.

We all agreed that it was tasty. We also agreed that adding bacon might make it even better. As a matter of fact, I’m going to make a couple of these to take to a church breakfast tomorrow.

So, Eunice, thanks for the great idea. Maybe you just wanted to teach folks to be resourceful. Who knows? But we liked your cheese pie, and it was fun cooking with the two coolest girls in town! 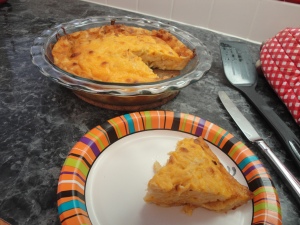 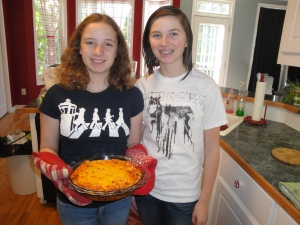 3 thoughts on “Gimme a break, Eunice!”