Before I tell about today’s pie, I wanted to relay some information from my friend, Julia, who is a Presbyterian. She said that she asked her mom about yesterday’s Presbyterian Pie, and her mom said that it used to be that the Baptists never wanted to put any bourbon or rum in their desserts, but the Presbyterians had no problem with it. Now, I believe this. Like I said, I grew up Baptist. BUT, I know that my Mom put liquor in all kinds of sweets. That’s why they tasted so good. I remember waiting in the car for her to go in and get the yummy liqueur that she put in her cakes–it really did help them to be even more moist and flavorful. Plus, raise your hand if you’ve enjoyed rum cake, bourbon balls, or fruitcake that was made fabulous by liquor. The interesting thing was that Steve’s Presbyterian Pie didn’t have any in it. Oh well, next time!

Anyhoo, my family loves raspberries. Last time I went to the store, I bought two 6 oz. containers of fresh ones. I don’t know what I was thinking, because that’s nowhere NEAR enough to fill up a pie. But those 12 ounces cost $7.00, and man, I am cheap, so that’s probably why I wasn’t thinking straight.

This morning, when I got those raspberries out of the fridge, I knew I was going to have to be creative. At first I considered small pies (pot pie-sized), but then I remembered how much I like to see a slice of pie. I figured it was just be a heap of gooey red stuff. So, I checked to see what else I had handy that I could toss in there. Here’s what I had: 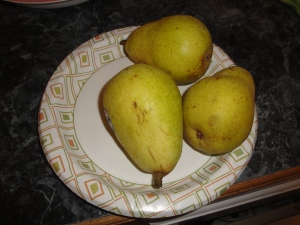 So I peeled them , chopped them up, and dumped them in that pie. I added a bit more sugar and flour. I use a chart in my Better Homes and Gardens New Cookbook that helps determine how much sugar and flour to add to different fruits. I admit that this time I was sorta guess-timating. I know, I know….sloppy baking. I hope it turns out.

All right: Reader’s Poll. Who likes pears? And if you do, do you like them hard or soft? My husband and I are divided on this issue. I like a pear to be crunchy like a crisp apple. He, on the other hand, likes to slide it along his teeth and let the juice go everywhere. I know this means the pear is ripe, but to me, it’s just plain mushy. Thoughts?

These pears were in-between crunchy and mushy, which was good for slicing them up. Here’s the pie before it went into the oven.

I brushed it with some butter and added a little flower decoration.I think the crimping looks pretty decent–only a few lumpy spots.

I’m hoping my husband and I will be tasting this pie after lunch today. Gotta let it cool for a couple of hours.

Interesting information: When searching online poetry resources such as whatryhmeswith.com , I learned that even though some words rhyme with part of raspberry, only one is a true rhyme. Asbury. Look that one up. You won’t believe it–it’s super METHODIST. Good grief. Who knew that raspberries were Methodist?

I learned something else about raspberries today. Did you know there was a band in the 70’s called the Raspberries? I’m kind of embarrassed that I haven’t heard of them, being born in 1971 and all. In case you haven’t either, here’s a link to a song by them.

OK, so today’s pie song has been sung. My countdown app says I have 23 days to go until I turn 40. This is getting to be really interesting. I might just have to put off my birthday for a while…hmmmm…