Last night I made this Reese’s Peanut Butter Cup Pie after I got home from my daughter’s chorus concert. I had to drop by the store first because I was about out of eggs and pie crust stuff. Can’t let that happen. So I didn’t begin baking until about 9:00. Both pies I made were baked, cooling, and cleaned up by 10:00. So they were definitely what I classify as easy pies. 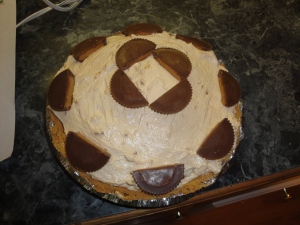 I have to admit that I made them because I was grateful–and relieved. I don’t know how many middle school chorus concerts you’ve been to, but they vary widely in both presentation and behavior. Well, I’m here to tell you that those kids sounded AWESOME. And I’m not just saying that ’cause I love my kid. It was obvious that the chorus teacher had worked really hard with the kids. I could tell that my daughter was proud of her work–and it had paid off! So I made this Reese’s Peanut Butter pie for the chorus teacher. I’m taking it to her this morning with this note. I couldn’t resist a pie card. After being a teacher for many years, I know that they get lots of complaints and not a lot of thanks. So I’m bringing some yummy thanks today to the chorus teacher. If you’re reading this and you’re a teacher, too, then I say, “Thanks!” 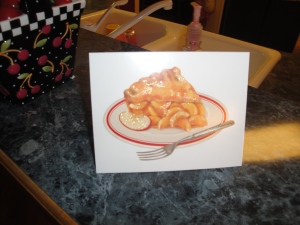 A note or two about this Reese’s pie. I had some extra filling, so I took a little ramekin full up to my husband, who was working late. To give him the full effect, I stuck an extra peanut butter cup in there. He was glad for the treat and declared that it was delicious. Another thing–the graham cracker crust (store-bought) was kinda crumbly. So I hope taste wins over organization. I’m hoping a pie with candy in it makes people feel forgiving. Lastly, if you think this pie looks yummy from the top, you should know that there is ANOTHER layer of Reese’s Peanut Butter Cups under that filling stuff. Decadent.

If you read yesterday’s blog, you know that I promised a pineapple coconut pie. Well, after I made the peanut butter one, I was still inspired, so I decided to bake the pineapple coconut one for the office staff at the middle school. I mean, I’m going inside anyway, and those people need some thanking, too. So I whipped it up–preparation was only 5 minutes, and baking was 45. It smelled terrific and turned out solid-looking. Hope they’ll enjoy it. It’s the last day before fall break in our county, so I know they’ll need help surviving this Friday! 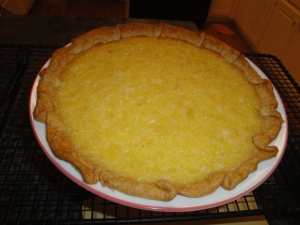 So today marks 34 days until my fortieth birthday, and I’ve just about lost track of how many pies I’ve made. So far, here’s the list:

That’s NINE pies in 6 days. My kitchen’s in high gear and my tummy’s full, but BOY am I having fun.

One thought on “Sing for your pie!”