Today was my last day at work. I’ve been a preschool director for over 3 years, and since our house is on the market, I resigned my position so that there would be a smooth transition for the school. I’ve been transitioning out for several months, and today, the last day is here. It’s been a huge blessing working with wonderful ladies on the staff, and it’s so rewarding to do things every day that impact children and families. I’ve learned so much from my time as director, but I know it’s time to go. This is the longest I’ve stayed at any job–guess I have sort of a short attention span.

I decided to make some pies last night that I could take in to work today. Before I tell you about those, I wanted to share a bit more about yesterday’s whiskey pie. Our friend came by to pick up his pie in the evening, and thankfully, he said I should try a slice. I didn’t hesitate to try it, and I have a very good report. First of all, the pie came out in a pretty good slice. Here’s a photo: 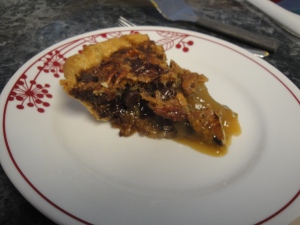 Secondly, the thing tasted so good that I kept making yummy noises. The Jack Daniels really did enhance the flavor, and we all know that chocolate never hurt a pie.

On to the other two pies–that makes for THREE in one day (pie-makin’ fool!). I made two super-fast pies. One was called a peanut butter pie , although I think it should just be called peanut because of how it looks. It was from my Easy as Pie cookbook, and the ingredients were very simple: peanut butter, peanuts, sugar, and a few other things. It smelled so good while it was baking, and I can’t wait to taste it.

The next pie I baked was a pumpkin pie.

The main motivation was that I had the stuff already AND that I needed to take two pies in order for everyone to have a slice of something. It was even easier than the peanut butter pie. The recipe was on the can. I’m a fan of canned pumpkin. Once, when I taught second grade, I made a pumpkin pie with my class FROM SCRATCH. Starting with a real pumpkin. It was really hard work, especially with 20 eight year olds and a convection oven. They had fun, though, and the pie tasted OK.

Today’s pumpkin pie was really happy-smelling in the oven, and it reminded me that Thanksgiving is not so far away! It also made me check the fridge for Cool Whip. Whew. I’ve got it. LOVE, love, love whipped cream on pumpkin pie. And not just one of those sissy sized “dollops.” I need at least a WAD or maybe even enough to cover my whole slice. And for me, no canned whipped cream, only Cool Whip in a tub. Just my preference. 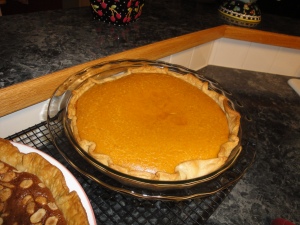 I hope everyone enjoyed those pumpkin and peanut pies on our last day together. Sniff… I received some lovely cards and gifts from my coworkers and friends, and they all pitched in to make me a Mexican feast! So much delicious food! Thanks guys!

I got to taste both of the pies. I enjoyed both, but a lot of people really seemed to like the peanut pie. It was moist and salty and sweet all at the same time, and it struck me as the type of pie I’d love to have with coffee. Both pies were excellent with Cool Whip.

Since I made these pies last night, I’ll need to make one for today. That  one’s gonna be pineapple coconut pie. I’ve got to take something to my daughter’s chorus concert tonight anyway and, surprisingly, I happen to have both coconut and pineapple around.This one’s in the Easy as Pie book also, so I’m expecting it to be just that. You’ll get the report tomorrow on how the coconut pineapple turned out.