Today, my daughter and I were vendors at our county’s local Farmer’s Market. What a great day we had! I thought things went VERY well, especially considering it was our first time AND we had no idea what to expect. Our goals were to see what it was like, have fun, and maybe make a little gas money for our summer vacation to the beach in a few weeks. We accomplished them all! We only came home with two pies, which we plan to take to Memorial Day festivities with friends this weekend. 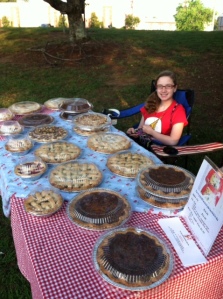 Most of you know that I’ve been baking pies for about 8 months now. I’ve enjoyed making them and have particularly enjoyed giving them away–which I’ll still do. As I’ve said many times before, sometimes, people just need a pie.

I sort of got involved in the market last-minute–didn’t turn in my application until Wednesday of this week. I was approved on the spot and then the crazy baking began. I was able to make lots of crusts Wednesday evening and refrigerate them, which really cut down on baking time yesterday.

Funny thing was, I put a post on Facebook to let folks know where I’d be on Saturday, and the orders started coming in. I sold five pies on Friday, before I ever got to the market! 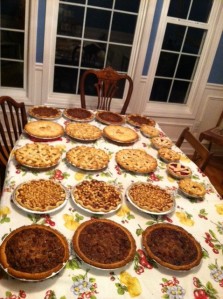 There is a HUGE learning curve with this sort of thing. How long will it take? How many pies can you bake at once? How much does it cost to make them? So much to learn. The good news though–after baking 26 pies in two days, I can still say that I really enjoyed it. So satisfying to handle and roll out the dough, to carefully mix fillings, and OH the smell! My house still smells wonderful!

My number one challenge was transporting pies. They must be covered, and they can’t be cream pies or anything that would have trouble out of the fridge. They don’t quite fit in the cooler, and it turns out that the apple pies were a bit juicier than I realized. Just ask the floor of my mini-van. It was a little bit of a Three Stooges type scenario getting to the market, but we made it. 🙂

It was fantastic meeting new folks and chatting with them. Some just had questions about the pie, but some really had stories to tell. They told what their favorite pies were. They shared about pies that their grandmothers made. They asked if I knew how to make rhubarb (haven’t been brave enough yet) or cherry or peach pies. One gentleman described coming home after school to pie–fond memories for him. Another told me how to pit tart cherries.

People–young and old–have so much to offer when we listen!

If only we all spent more time listening.

I got a lot of joy out of bringing back good memories for people. I also loved spending the morning with my teenager, who bravely got up at six with me so that we could stake out a shady spot. She was great company and lots of help, and I rewarded her with some cute earrings she liked from a nearby jewelry vendor.

Right now, I’m only committed to the next two Saturdays, but we’ll see how it goes.

I’m thankful for this day. It’s kinda scary to put yourself (and your pies) out there. But it reminds me of the feeling you get after you’ve finally braved the BIG diving board at the pool–you were terrified, but when you came up out of the water and took that first breath, you knew you’d do it again and again!