For weeks, now, my daughter has been practicing for her school play, Cinderella.I’ve already seen the show twice, my husband and in-laws are there tonight, and I’ll get to see it again tomorrow–Mother’s Day–with some more friends and family. The picture doesn’t do justice to the pretty villager our kid played–best one in the whole show, in my only-slightly-biased opinion. So graceful and happy on the stage. We get so much joy from watching her do something she loves and seeing all her hard work pay off. I was just breathless watching her in the ballroom scene–couldn’t believe how grown up she looked. Sigh. I’m so proud of her! 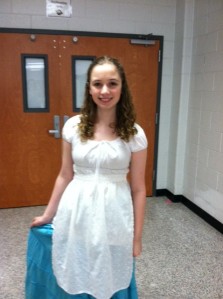 So tomorrow, they’re having set strike after the final show, and then a pot luck supper for all the families. If you’ve ever been part of a production like this, you know that set strike is not fun, and it’s also not optional.Therefore, we’ll all be there with bells on…or at least with pies.

I baked two pies for the occasion. The first is Cheery Berry Pie. It includes a mixture of cherry pie filling, blueberries, and raspberries. The top crust displays a pumpkin, just waiting for a Fairy Godmother’s magic.

The second pie is Just Plain Cherry Pie. Its top crust has hearts–love going out to all the kids in the show  AND to the hard-working staff and parents who made it happen. 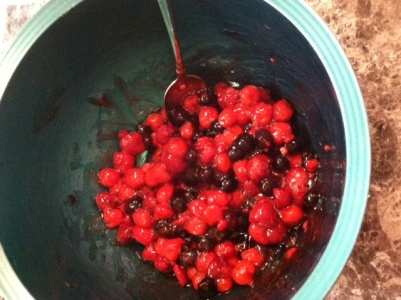 One thing I loved watching during each performance–the parents. Sure, the kids were fantastic, but I wish I had video and still shots of those parents. Proud, beaming faces. Glassy eyes and cheeks shiny with tears. Clutching cameras and video recorders. Hands giddily clapping–maybe a little too loud sometimes–for their princess, or prince, or horse, or villager, or cheese merchant. Didn’t matter what part the child played. You could just hear their proud hearts shouting, “That is MY mouse.” “Look at MY kid–she is the best dancer!” “Wow! MY son is the best singer of all!”

I know there’s some criticism going around these days about kids.

They don’t ALL need trophies.

Maybe. But you couldn’t have convinced me of any of that today. Not when those kids took their bows. Not when the audience stood up and clapped loudly and cheered. Not when moms high-fived their sons and dads hugged their daughters. Those kids worked hard. Those kids were awesome. They deserved every whoop, holler, and grocery store bouquet that was thrown their way.

I certainly believe kids need to work hard, buck up, tough it out, let someone else win, shake hands when they lose, face disappointment, and all that responsible stuff. I hope my kids will do all of it.

Sometimes, though, a kid just needs to feel like a star.

I love my kids–they’ll always be our shining stars!

One thought on “Cinderella Pie”