For the last couple of weeks, my husband and I have been on a nutrition kick. He started meeting with a trainer, and we’re both keeping track of everything we eat. We’ve researched apps for our various devices, counted calories, read labels, measured stuff…LOTS of measuring. Here’s the drawer where we keep some of our measuring stuff: 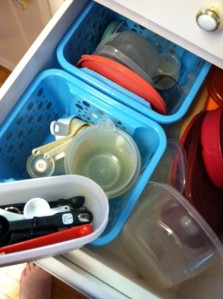 On a side note–why isn’t there a good way to organize all this stuff? All those neat freaks on Pinterest and on all those organization blogs must not have the same type and volume of plastic crap that we do. Sigh.OCD hell is full of mismatched Tupperware. ANYWAY….

All that measuring is precisely why I will NOT be eating any of this Chocolate Chip Banana Bread that I baked this morning. It smells delicious. I know it’s good, because I’ve baked it a billion times. But the thought of all that math just makes me lose my appetite. So I’m gonna take it to work for those folks to eat. I’ve used the same recipe for years. It’s not from a cookbook. It’s from my Mom the BFA (Bringer of Food Awesomeness). One day, early in my married years, I called her for a banana bread recipe. I didn’t want to forget it, so I grabbed this cookbook and wrote it down in the front. Funny thing is, that’s really the only reason we keep the cookbook now. I think we got it as a wedding gift.

If you gave it to us, it’s our favorite cookbook ever! Thank you so much!

Truth be told, we’ve only tried one recipe from it. See those pretty green circle cookies on the front cover? My husband and I tried to make those during the first year we were married. I remember our efforts in the tiny kitchen of our one-bedroom basement apartment. Not a success, really. He seems to remember the cookies tasting pretty good, but they looked like they’d been run over. Oh well, it was fun trying. 🙂 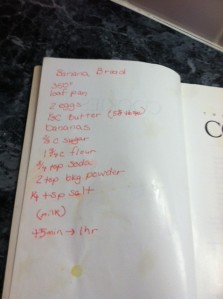 So the bread recipe lives in this cookbook. It’s funny that I even use it. Ask my husband about me and recipes. I usually just improvise. This has always driven him nutso. In the past, when baking or cooking, I’d just “guesstimate” amounts. I used uncertain measurements such as a glug, a dollop, a little bit, two shakes, or “until it looks right.” It wasn’t until my 40th birthday pie adventure that I really embraced measuring.

In an uncertain time in my life, I think all that measuring provided some certainty–some order in things. It was one small way of controlling something. It’s funny though, that all that measuring did NOT provide guarantees or predictability, two things we all want deep down. Sure, we want to say we’re daredevils, or spontaneous, or whatever.

Too bad. Gotta wait. None of your business. Need to know basis. Just chill.

NO! I don’t like waiting and not knowing. Does anyone relate? Anyone?

Meanwhile, though, I’ll just have to wait and pray and know that things will be all right. And bake pies. You may be wondering where the pie is today in this pie blog. It’s for lunch.

My husband and I will be sharing a Feta Veggie Freeform Tart. It’s got a homemade crust, red and yellow peppers, onions, feta cheese, and basil. And YES, I’ve measured EVERYTHING that’s going into that thing. After doing the math involved with homemade pie crust, I have this advice:

Therefore do not worry about tomorrow, for tomorrow will worry about itself. Each day has enough trouble of its own. Matthew 6:34

One thought on “Measuring Up”