I am a list maker. I make lists of things to do, things I’ve done, longterm projects, groceries, people to contact, and on and on. Lists really do help me organize my thoughts and tasks, but most of all

I even use a list-making app called “Daily Deeds” to have another place to check stuff off. Why this obsession with check marks? Truth is, I’m kind of a control freak, and I like to keep track of what’s been accomplished. Also, when the magnitude or volume of jobs becomes seemingly insurmountable, I can sometimes find comfort in looking back over what I’ve gotten done.

One of the things I did this week was to make a 40th birthday pie for a friend of mine. She’s a great lady who does a lot of great stuff for her family, her community, and her church. Besides all that, I just turned 40, and I remember the distinct feeling of deserving a reward for getting there; a trophy, a plaque, a certificate….I guess a pie will do.

I baked a Chocolate Cherry Pie, which is very similar to a cherry ganache pie that I’ve made in the past. I chose this one because when I asked my friend what kind of pie she liked, she said, “chocolate’s always good…or cherry…” So I made both in one pie!

One of the things on my baking wish list is a double boiler. During the days when I was baking one or more pies every day, I used a makeshift one two or three times a week. I made it work, but it drove me nuts. The bowl was too big, the pot was too small, and I was too high maintenance. All that to say, lately, I’ve been melting stuff in the microwave. That’s how THIS awesomeness happened:

That’s right folks: BACON IN CHOCOLATE. I know it’s not an original idea, but it was so tasty. I had already gotten the pie ready to go in the oven, and there was leftover chocolate, and it was breakfast time, so….I “repurposed leftover ingredients.” Scrumptious.

The pie looked pretty tidy as I put it in the oven–the “40” was just right. Then I baked it, and it accidentally became a symbol of how time changes things. 40…just a little “cracked.” 🙂 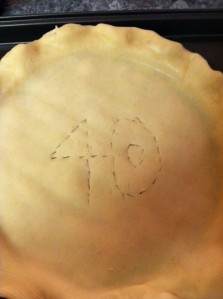 So the pie was checked off my list. I delivered it to my friend, who enjoyed it later that evening and declared that the chocolate inside was “the bomb.” The chocolate was merely chocolate chips, half and half, and vanilla. I’m glad that it was good.

I got to thinking about those daily (and weekly, and monthly) to-do lists I love to make and I asked myself this question:

So make a list. Check it twice. Celebrate what’s checked. And what’s not checked? Don’t give up. Make it smaller. Divide it up. Ask for help. OR….decide that it wasn’t that big of a deal anyway. One thing’s for sure–I’ve found that people always make time for what matters most to them.

Look at your list. Does it show what matters to you?