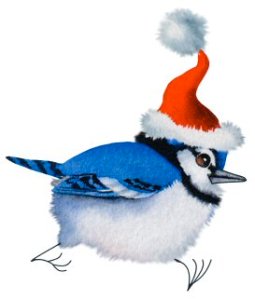 Our family loves this time of year. It’s only December 3rd, and our decorations are up, lots of gifts are wrapped, and we’ve begun the crazy calendar corral of trying to get kids and grownups to holiday activities. And nothing means Christmas like PIE!

We’ve got two different Christmas parties this weekend, so I made two different pies. The first pie was a Blackpeary Pie. The second was Cherry Ganache Deluxe Pie. 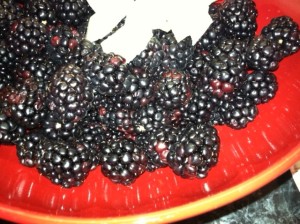 Look at these gorgeous blackberries I found at the grocery store this week. What a beautiful fruit! I added a few pears I had–just to keep things crazy. I had several homemade crusts ready in the fridge, so that’s what I used for today’s pies. I really do love the taste and texture of them.

I definitely had to make pies with a top crust so that I could use my favorite Christmas tree crust cutter. So festive. It makes perfect holes through which that pretty fruit can peek!

The Blackpeary was pretty simple. I just added sugar and flour and filled the crust. I then added butter and sugar on top to make sure it browned nicely.

I remembered my crust shields during the first 25 minutes of baking, so no burnt crusts. Hooray!

The second pie of the day got a bit more complicated, but not in a bad way. To make a pie with ganache on the bottom of the crust, you need to use a double boiler. I started out with white chocolate chips, half and half, and vanilla. Well, the ganache became “deluxe” when I realized that I had added way too much liquid. Woops. 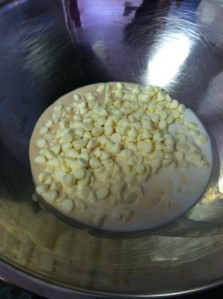 So I had to add semi-sweet chocolate chips. Lots of them. And for some reason, it made the ganache really delicious. It also made A LOT of ganache. Therefore, while I was getting pie ingredients ready and waiting for the first pie to bake, I found some other uses for the deluxe ganache. Chocolate graham crackers. OK, those were pretty tasty. But there was still a lot left. Hmmmm…..

I used some lollipop sticks I’d gotten at the craft store and stabbed a bunch of yummy, fluffy marshmallows. The result was very tasty and tons of fun, especially after I found the Christmas sprinkles.

I filled the bottom of the second crust with the delicious chocolate stuff, and there was STILL more, so I called my kids down for a yummy snack that we’re gonna also pretend was healthy–since fruit was involved.

Finally, the Blackpeary Pie came out of the oven and the Cherry Ganache Deluxe pie went in. I was very happy with the way both pies turned out. My trusty pie birds did their jobs, so there was very little fruit that misbehaved or bubbled over. Thanks, birdies!

As for that old bluebird being “gone away,” we’re not in a winter wonderland yet down here in Georgia. Every now and then we get some snow in December, but we’re more likely to have a New Year’s or Valentine’s snow than a Christmas one.

All the same, winter’s on its way. It’s time to give thanks for warm houses, warm socks, and a fire in the fireplace–and to remember those who don’t have those luxuries.

I was so happy to receive invitations to three different Christmas get -togethers that encouraged guests to bring food or children’s toys to help our local Emergency Relief Organization. What a great way to remind people that if they’ve got the time and the means to party this holiday season, then they’ve got what it takes to share with others. It doesn’t take much to make a difference–a few cans of food, small toys, or a warm blanket. Find opportunities for your family to share with others during this Christmas season.

Just like that chocolate ganache–most of us have more stuff than we know what to do with. Keep looking for ways to share it, to use it up, to give to others and make life sweeter!

Here to stay is a new bird! He sings a love song, as we go along… 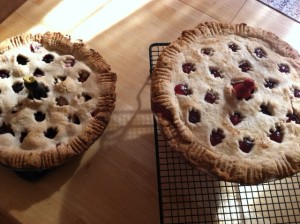