I decided to make some teeny tiny pies on sticks. Lollipop Pies. If there’s anything cuter than that, I don’t know what it is. I stole the idea from a cooking channel show about pie. What a fun project for a cool fall evening!

I had some homemade crust in the fridge from the other night, so I rolled it out to cut some small circles.

I love a little biscuit cutter. It reminds me of the tiny biscuits that my mom used to put on top of her pork chop pie. The biscuits were pretty much my favorite part of that casserole. They were gooey on the bottom and crusty on top. Perfect.

I whipped up a small batch of filling from some berries I had on hand. I just added some sugar and a tad of cornstarch. After reading about these little pies online, I followed the advice of many by only putting a couple of berries in each pie.

Next, I set about doing the cutest little crimping ever. I just used one of the lollipop sticks as a crimper. I found the sticks at Hobby Lobby. Don’t forget to put a stick inside the pop BEFORE you start crimping. Almost forgot mine. Also, crimp carefully–that fruit juice really wants to escape. 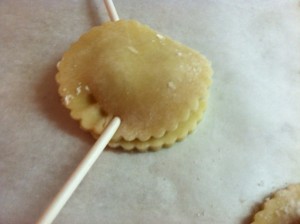 Lastly, I brushed them all with egg wash, sprinkled them with sugar and baked them for 15 minutes at 375 degrees.

At the same time, I baked up the leftovers into this precious little Double Angel Pie. I had exactly enough crust left to hold this berry filling and to make two tiny angels for the top.

Made me think of the time my good friend, Becky, and I stomped grapes at the Biltmore Winery. Good times. Making a fool of myself with good friends is a favorite pastime. 🙂

These little angels weren’t stomping anything, but they looked sweet on the little pie.

Back to Lollipop Pies:

Not bad for a first attempt! They are so cute! I am going to run a few more tests to figure out what other tiny fillings I can stuff into that small crust. I’m thinking chocolate or pumpkin…We’ll see. Anyway, lots of fun. I dipped one into some whipped cream. Yum.

I’ll keep you posted on more tiny pies, and Thanksgiving’s only a week away, so you KNOW they’ll be some pie action around here.