October 25, 2011
Little Jack Horner
Sat in the corner,
Eating a Christmas pie;
He put in his thumb,
And pulled out a plum,

All right, I’ll let you know that I baked today’s pie, Plum Pie, for several reasons:

1. I had this cute Mary Engelbreit drawing of Little Jack Horner that I wanted to share.

2. I needed to make a two crust fruit pie in order to try out one of my new pie birds.

3. I needed to make a pie that we would keep for ourselves so I could try out my new red pie plate.

4. I needed a pretty pie to be in pictures with me this afternoon. We’re having family pictures done at our house this afternoon, and you might imagine by now that we’re not the type to just stand calmly side by side and smile…

5. I’ve never tried plum pie, and today is the day.

I did a little research, and it turns out that you don’t peel plums before you put them in pie. I didn’t peel them, and I put them in a bowl with sugar, cinnamon, and flour. I confess that I added some extra sugar, because I kept reading about folks saying that their plum pie was tart. I also accidentally added more cinnamon by way of heavy handed measuring. Woops.

I dumped it all (already smelling great, by the way) into a crust (store bought today–too tired) around my little black pie bird. Then I prepared the top crust by marking an X in the center so that it would easily slide over the bird. 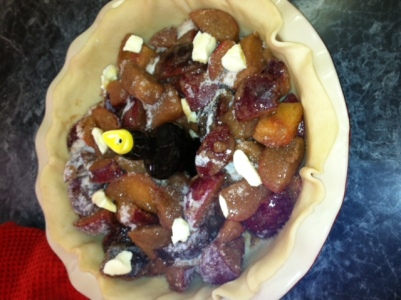 It really worked well. Then I crimped the edges and sprinkled a bit of sugar over the top. The recipe called for it to bake at 425 degrees for 40 minutes. The crusts were getting brown quickly, so I took it out with 15 minutes to go and added metal crust protectors. It was done (perhaps a bit brown, depending on your preference) in 40 minutes, and it only bubbled a tiny bit. I think the pie bird did its job for sure–normally fruit pies are a mess! 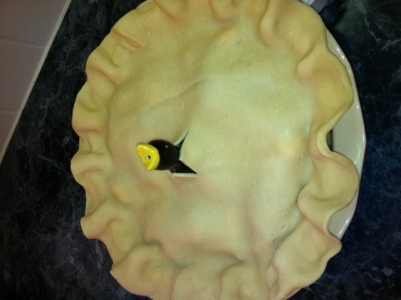 I was very happy with how the finished pie looked. The next thing I’m curious about is how bakers of days gone by ever got a pretty slice if they had a bird in their pies. Oh well, no matter…I love that bird in there. He shows what we all know to be true:

When things get hot, you gotta let off some steam, or else things are gonna bubble over. And then you’ll have a sticky mess to clean up. I think this pie-making venture is the perfect way for me to keep from “bubbling over.” What are you doing to let off steam?